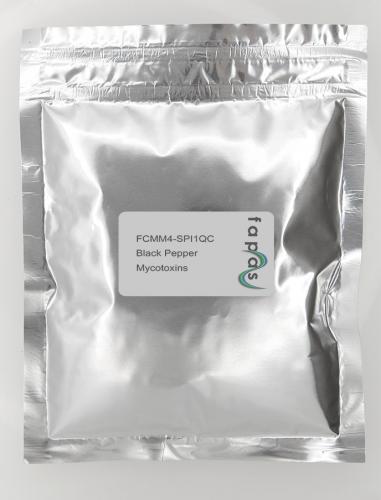 The analytes of interest on this occasion are Aflatoxins plus Ochratoxin A.  Aflatoxin is a potent carcinogen produced by the Aspergillus flavous and Aspergillus parasiticus moulds which commonly grow and can be found in corn, which can subsequently enter into animal feed. Mycotoxins are toxic secondary metabolites produced by fungi on agricultural commodities in the field or during storage.  It is estimated at 25% of the world's food crops are affected, resulting in large commercial losses. Mycotoxins can cause serious health problems (including some being suspected carcinogens) and so are tightly regulated across the world. Mycotoxin contamination is the largest cause of rapid alerts raised against imported food products.  Fapas has introduced multi-mycotoxin proficiency tests as well as those for emerging mycotoxins. Pepper is used across a large range of foodstuffs worldwide as a seasoning ingredient. Peppercorns are among the most widely traded spices in the world, which can form large challenges to maintain high quality, safe produce used as ingredients within manufacturers’ foodstuffs. To achieve the high quality testing required to highlight any potentially unsafe levels of mycotoxins within peppercorns effective testing processes must be adhered to. Fapas proficiency testing can highlight any areas of improvement within your testing processes, allowing you to address and therefore improve your testing abilities.