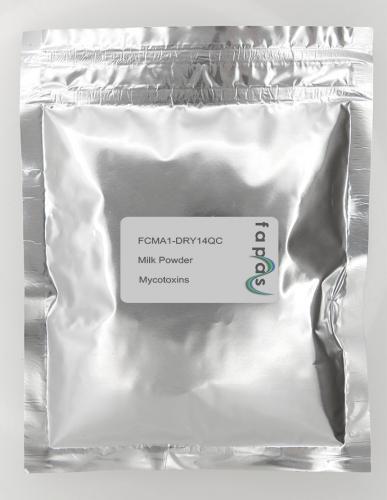 Mycotoxins are toxic secondary metabolites produced by fungi on agricultural commodities in the field or during storage. Aflatoxins are secondary Aspergillus fungal metabolites (moulds) which pose a serious health risk for humans due to their carcinogenic properties. Aflatoxins occur naturally and are produced by many species, most notably Aspergillus flavus and Aspergillus parasiticus (moulds). Among them Aflatoxin B1 is the most carcinogenic and is heavily regulated. Aflatoxin M1 is found in the milk of cows that ingested feed contaminated with Aflatoxin B1. Aflatoxins are relatively stable to thermal processes like pasteurisation and sterilisation. Mycotoxin contamination is the largest cause of rapid alerts raised against imported food products.  This milk powder quality control material is a vital tool in maintaining high standards and ensuring your product is mass produced to the same level every time. Milk powder forms a large part of the nutritional intake of infant's diets as well as being a key ingredient of many processed foodstuffs. As such maintaining your effective testing capabilities is paramount and using this quality control material will help you do that.  The quality control material is provided in a powder form.