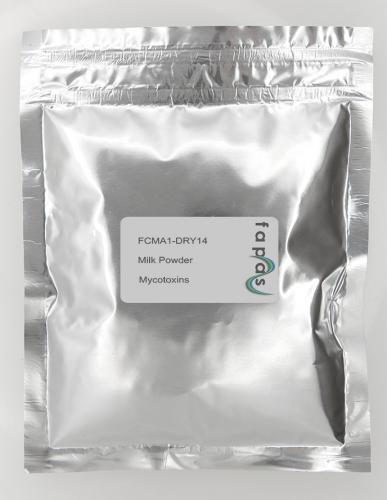 Mycotoxins are toxic secondary metabolites produced by fungi on agricultural commodities in the field or during storage.  It is estimated that 25% of the world's food crops are affected, resulting in large commercial losses. Mycotoxins can cause serious health problems (including some being suspected carcinogens with particularly potential damage to the liver) and so are tightly regulated across the world. Mycotoxin contamination is the largest cause of rapid alerts raised against imported food products.  Fapas has introduced multi-mycotoxin proficiency tests as well as those for emerging mycotoxins to maintain high quality accurate testing across a range of analytes. Milk Powder forms a large part of the nutritional intake of an infant's diet as well as being a key ingredient of many processed foodstuffs. The aflatoxins consist of about 20 similar compounds belonging to a group called the difuranocoumarins, but only four are naturally found in foods. These are aflatoxins B1, B2, G1 and G2. Aflatoxin B1 is the most commonly found in food and also the most toxic. When lactating cattle and other animals ingest aflatoxins in contaminated feed, toxic metabolites can be formed and may be present in milk. These metabolites, aflatoxin M1 and M2, are potentially important contaminants in dairy products.  Aflatoxin M1 is both a toxic and carcinogenic mycotoxin that has been shown to cause immunosuppression in animals.  Due to the nature of this aflatoxin and the regulations governing its use, the levels of this analyte in this matrix is set at low concentrations and as such require effective testing to which you need to demostrate something, easily proven through proficiency testing.  The test material is provided in a powder form.
ADD TO BASKET

Nitrate and Nitrite in Milk Powder in Proficiency Test